Enemies of the people

We’ve been rivetted by live coverage of Trump’s second impeachment trial, marvelling at the incompetence of his attorneys, who are effective only in muddying the issues, and wondering what could possibly persuade Republican senators to acquit him in the face of such overwhelming evidence.

On reflection, the incompetence is not so surprising. Even if Trump didn’t have a long history as a terrible client, incapable of following a legal strategy, keeping his mouth shut and paying his fees, this case would be one to avoid. Any lawyer with integrity or an eye to a professional future might hesitate to get mixed up in it. And so Trump is left with anything but the brightest. Some Trump-supporters have criticized the performance of the defence team, but without going so far as to acknowledge that anyone would struggle to defend the indefensible.

Meanwhile, the Democratic impeachment managers have achieved three significant things. They’ve laid out the full horror of what happened, linked the actions of the mob inextricably to Trump’s words, and presented the Republicans consistently as fellow-victims rather than co-conspirators. 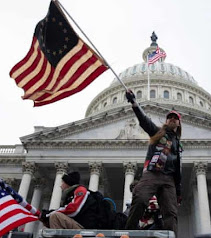 The last of these shows how tightly disciplined they are. The opposition condemned this trial in advance as a partisan attack by Democrats against a Republican President and continue to deflect criticism of Trump by impugning the integrity of individual Democrats. In response, the impeachment managers have said nothing about four-and-a-half years of craven apologetics for Trump from the GOP, nothing about the hundred or more House Republicans who persisted in voting to overturn the election result even after the desecration of the Capitol, nothing about Senator Hawley’s clenched-fist support for the mob. Instead, they have reminded us that principal among the targets was Vice-President Pence and have held up as heroes the Republican officials around the country who resisted illegal pressure from the White House and protected the democratic process in the face of threats of violence against them and their families.

Similarly they have steered clear of any suggestion that individual members of the Capitol police were sympathetic to the insurrection and made no mention of the likelihood that black demonstrators would have been shot long before they got anywhere near the Senate chamber. They have focused instead on the heroic actions of police officers and the injuries they suffered.

They have spoken throughout with reason enlivened by passion and tempered by empathy. They have embraced their Republican colleagues and presented Trump not as a product of his party but as the leader of a criminal faction. And yet, in spite of all this, insiders predict that most Republicans will vote to acquit him. How can this be?

The pragmatic support for Trump from constitutional conservatives and evangelical Christians was always based on a crude bargain – they turned a blind eye to his grotesque unfitness for office and he gave them the judges they wanted. As for the corporate class, they tolerated his antics as long as they got their tax breaks. But he’s no longer President and those bargains are over.

So what’s left? For some elected Republicans, fear has always been key, the fear of being verbally attacked and ridiculed, of losing support and funding and being primaried out of office. This fear remains. And the dangers are no longer merely loss of status and income. Increasingly those who speak out against Trump face credible death-threats.

What about the more positive inducements? The Trumpian beast remains a huge force. Some Senators are clinging on for the ride. A few must imagine themselves jockeying the beast all the way to the White House. But it’s a fickle creature. Until Trump demanded the impossible of him, Mike Pence was abjectly loyal, but they came for him with a gibbet anyway.

In the New Yorker footage of the insurrection, one of the most enlightening moments, for me, was when some of the rioters found Ted Cruz’s desk. I was struck by the brittleness under the bravado, the sense of identities dependent on the perceived treachery of others. Cruz’s reputation survived this moment of scrutiny, but it’s clear that it would take only one misstep for him to become the next enemy of the people.

GREEN HELMET: His objection! He was gonna sell us out all along.

GREEN HELMET: Look. Objection to counting the electoral votes of the State of Arizona.

GREEN HELMET: All right, all right.

VOICE 7: There’s gotta be something in here we can fucking use against these scumbags.

Posted by Joe Treasure at 07:21 No comments: