Leni is in search of gefilte fish for Passover. I suggest an outing to Golders Green – a good excuse to see an unfamiliar bit of London. She asks if it’s on a tube line, and the words of a song come into my head:

Finchley Central
is two and sixpence
to Golders Green on the Northern Line.
On the platform
by the kiosk
there you said you’d be mine…

I only know this song because my older brother Patrick (who died too young) used to sing it. Where does it come from? YouTube directs me to The New Vaudeville Band. These 70s musicians playing their banjos and trombones with 20s-style slicked down hair and moustaches remind me of Patrick playing the saw, and I recognize the influence.

t requires the same kind of touch as it takes to get a note by rubbing a wet finger round the rim of a wine glass, or to get a harmonic out of violin string.

Posted by Joe Treasure at 03:08 No comments:

Email ThisBlogThis!Share to TwitterShare to FacebookShare to Pinterest
Labels: my family

And questioning the answers

It’s all about publicising the book, of course. And I’m grateful for any attention it gets. I feel somehow more protective of Besotted, perhaps because it had a slightly more difficult birth. So I’m happy to tell the Glasgow Sunday Herald anything they want to know (see my previous posting on answering questions).
Underrated books are harder to come up with. There must be thousands of them – decent books that sink without trace, probably before I got to hear of them, my sources of information being the same as everyone else’s. I enjoyed all Peter Benson’s books and learnt a lot from them, but he’s just one example of a good writer whose books go out of print to make way for other books that just happen to be newer.
I’m not actually complaining about the questions. I think they’re good questions. And at least they’re about books, which makes sense, books being what I write. It’s probably just that I don’t like committing myself, which is why I write fiction. It allows me to avoid making unambiguous assertions unless they’re spoken by made-up characters, some of whom are decidedly odd and none of whom are me.
Posted by Joe Treasure at 05:24 No comments:

I was sent these questions by the Glasgow Sunday Herald, and the answers were published last weekend. My thoughts on doing this kind of thing must wait for another post.
WHAT BOOKS ARE BESIDE YOUR BED AT THE MOMENT?
I’m halfway through Hilary Mantel’s Wolf Hall, taking it slowly and savouring it. I’ve begun Kamila Shamsie’s Burnt Shadows, and I’m enjoying its sensitive evocation of Nakasaki before the bomb drops. John Worthen’s biography of DH Lawrence is in the pile.
WHICH WRITER LIVED THE LIFE YOU MOST ADMIRE?
WITH WHICH LITERARY CHARACTER DID YOU FIRST IDENTIFY?
Dick Dewy in Under the Greenwood Tree, a tongue-tied yokel who gets the girl. It launched me on an early romp through Hardy’s novels that included The Trumpet Major and Far from the Madding Crowd. My enthusiasm hit a wall when, still only 15, I reached the last few pages of Tess of the D’urbervilles and realized, with a sick feeling, that this wasn’t going to end well.
WHAT BOOK DO YOU FIRST REMEMBER BEING READ TO YOU AS A CHILD?
My father, a Catholic convert, read us stories about a guardian angel called Wopsy who watches over a little African boy. It was a dog-eared paperback, and no doubt anachronistic even then. My father took his religion very seriously, and the book had perhaps been recommended by some priest. The African boy’s mother has been converted by the missionaries, I remember, but his father is a pagan and gets drunk on banana beer.
WHAT IS THE MOST UNDERRATED BOOK YOU HAVE EVER READ?
It depends who’s doing the rating. I was far too young to read John Updike’s Couples when it hit the zeitgeist in 1968, but I read it a few years ago and found it moving, intelligent, and evocative of its time without being dated. But there are so many unjustly neglected books. A writer who seems to have dropped below the radar recently is Peter Benson. I’ve enjoyed all his novels, but perhaps most admire Odo’s Hanging, which puts the story of the making of the Bayeux Tapestry in the words of a mute underling.
The Great Gatsby. Not that there isn’t plenty to enjoy in it, but it doesn’t deserve its exalted status. US publishers, Modern Library, rated it second only to Ulysses in its 100 best English language novels of the twentieth century. I re-read it recently, along with A Farewell to Arms, also written in the 20s, and I was struck with how much better Hemingway is. The tone of Gatsby is quite uneven and some of the writing is cloyingly sweet.
DO YOU HAVE ANY RITUALS OR SUPERSTITIONS AS A WRITER?
I’m wary of dissipating the energy around a book by talking about it before it’s written. That’s a kind of superstition. As for rituals, I wouldn’t mind a developing a few. My life has been rather transient since I’ve been writing seriously. But I’m lucky that I’m able to write in lots of different circumstances. Perhaps because I grew up with eight brothers and sisters, I’m able to shut out distraction.
WHAT WAS IT ABOUT THE THEME OF NATIONAL IDENTITY THAT APPEALED TO YOU?
WAS EVOKING THE ATMOSPHERE OF THE THATCHER YEARS BASED ON PERSONAL EXPERIENCE?
I lived through the Thatcher years, and some of what I remembered found a place in the novel. But the progress of the story, as it took shape, determined what kind of period details were needed and I sometimes found myself turning to research for these. But I never thought of that section of the book as a portrait of an era. It’s about two brothers, their girlfriends and family relationships, their yearnings and ambitions. The period is incidental to most of this, though it does have a significant impact at certain moments.
Posted by Joe Treasure at 02:59 No comments:

J.D. Salinger’s death in January prompted me to take another look at The Catcher in the Rye. It strikes me that the book’s been overrated in some ways and underrated in others. Readers, male readers particularly, encounter it during adolescence and find it speaks to their sense of alienation. A couple of the obituaries I read in the American press seemed to have been written from that same space.

I didn’t read the book until I taught it in my twenties. I found the narrative voice exhilarating and funny, was moved by Holden Caulfield’s predicament, but didn’t identify with him. I’d come to it too late to endorse his exclusive claim on authenticity. Maybe he’s right, that he’s surrounded by phonies, but he’s far too insecure and demoralized to get anywhere close to offering an alternative vision.

The novel was infamously cited as an inspiration by John Lennon's killer. Boy, did he ever miss the point! Someone should have told him that Caulfield is an unreliable narrator. In telling his own story he buries the lead, because he hasn’t enough perspective to know what the lead is. He’s not morally deranged like Humbert Humbert obsessing over Lolita, nor as disabled as Christopher struggling to make sense of the curious incident of the dog in the night-time. But his view of people is significantly distorted by his own pain.

I see it more as a satire on the teenage sensibility than a celebration of it. I'm not sure, though, that Salinger would have agreed.
Posted by Joe Treasure at 11:24 No comments:

Email ThisBlogThis!Share to TwitterShare to FacebookShare to Pinterest
Labels: Catcher in the Rye, good writing

I've been reading Hilary Mantel's Wolf Hall. Making slow progress. Not because I don't love it, which I do, but only because it's a bit bulky for journeys and certainly can't be slipped into a pocket (I was curious to read it and didn't wait for the paperback). So it's a stay-at-home book. It's also a sitting-up book -- preferably with lumbar support.

These days I tend to have more than one book on the go, sometimes because I'm reading them for different purposes. I've been reading Moll Flanders and Margaret Atwood's The Year of the Flood, for example, because there are oblique connections with something I'm trying to write (and I'm a big fan of The Handmaid's Tale). Sometimes the reason is technological. I listen to books on CD, but only when I'm driving. So there are also car books and train books.

For a couple of weeks in February I had Sebastian Faulks' A Week in December in the car, and William Boyd's Ordinary Thunderstorms in my pocket. This was confusing. Both novels are set (more or less) in contemporary London. They're both (roughly speaking) thrillers, third person narratives that follow a variety of different characters not obviously connected. I found myself experiencing a composite novel about a hedge-fund manager, a climatologist on the run for a murder he didn't commit, a Polish footballer, a policewoman, a terrorist, etc, and wondering how the hell Sebastian Boyd was going to pull all these threads together.

In the end, Ordinary Thunderstorms survived this mangling better than A Week in December. Partly because it's a better book. To be fair to Faulks, he got the raw end of the deal. Inevitably there are moments of blankness in the car when the business of driving grabs your attention, and your accelerated heartbeat has nothing to do with the latest twist in the plot.
Posted by Joe Treasure at 10:41 No comments: 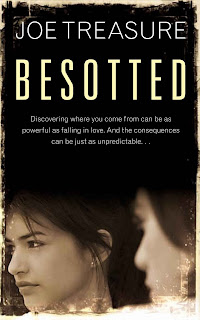 Some infatuations are so explosive it takes years for the dust to settle...

Strange feeling. Besotted appears later this week. For months it's been out of my hands, and pretty much out of my thoughts. And now here it comes, and there's nothing to do but hope some people buy it, read it, enjoy it.
Posted by Joe Treasure at 02:29 No comments: